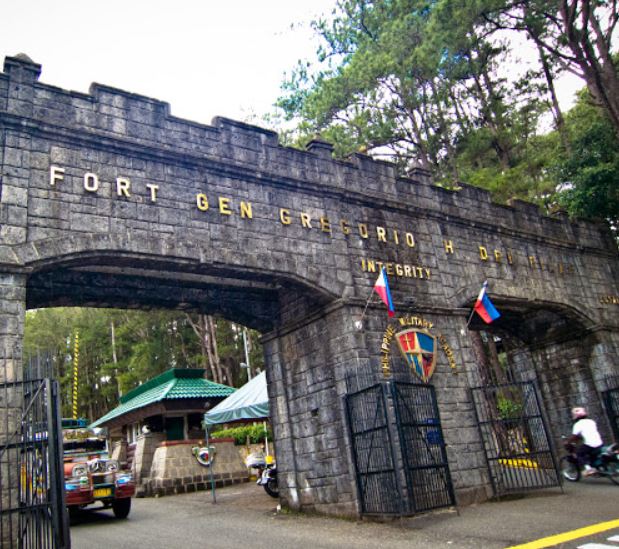 For the past 100 years, the officers training  school of the Armed Forces in the Philippines has made Baguio City its home. The Philippine Military Academy (PMA) boasts of a long and illustrious history of preparing only the best Filipino men -- and in recent times, women--  for military service.

Located at Fort Gegorio del Pilar on Loakan Road, visitors are welcome to explore the grounds, view the cadets performing their drills, and explore the PMA museum and walk around its manicured grounds to see vintage tanks and other historical military weapons.

PMA is full of tradition and pageantry. There are drill exhibitions on weekends, alumni homecoming and celebrations in February and graduation ceremonies at the end of the school year. The manicured grounds are open to the public all year round. Call PMA for a schedule of parades, exhibitions and other events.

The Philippine Military Academy began on October 25, 1898 with the establishment of the Academia Militar in Malolos, Bulacan by virtue of a decree issued by the first president of the young Philippine Republic, General Emilio Aguinaldo. Graduates were awarded regular commission in the armed forces. Its existence was short-lived, barely four months old, up to 20 January 1899, when hostilities between the Americans and Filipinos erupted.

While the Philippines was under American colonial rule, an officer´s school of the Philippine Constabulary was established at the Walled City of Intramuros in Manila on February 17, 1905.

The Philippine Legislature on September 8, 1926 passed Act No. 3496 renaming the school the ‘Philippine Constabulary Academy´ and lengthened its course from nine months to three years with provisions to strengthen the faculty and revise its curriculum.

On December 21, 1936, Commonwealth Act No. 1 (also known as the National Defense Act) was passed. The law formally created the Philippine Military Academy (PMA) and authorized it to confer a Bachelor of Science degree on its graduates after they successfully complete the four-year course.

The outbreak of World War II in late 1941 disrupted training at the Academy. Classes 1942 and 1943 were graduated ahead of schedule, assigned to combat units in various parts of the Philippines. Many perished during the war.

The Philippine Military Academy reopened on May 5, 1947 again at its former location in the Summer Capital, Camp Henry T. Allen. Due to the need for wider grounds, the Academy moved to its present site at Fort Gregorio del Pilar, a sprawling 373-hectare compound in Loakan, some 10 kilometers from downtown Baguio City. Named after the young hero of the battle of Tirad Pass, General Gregorio del Pilar, PMA in its new location was developed into a military training institution with facilities and infrastructure required by a growing academy.

Its pre-war technically-oriented curriculum, patterned after that of the US Military Academy at West Point, was restored. Socio-humanistic courses were added In the 1960s, as the curriculum underwent major changes, and strengthened to balance the techno-scientific disciplines, with a view towards providing a well-rounded education relevant to the needs of a growing Armed Forces of the Philippines.

In 1993, PMA was transformed into a ‘Tri-Service Academy´, which introduced specialized, branch-of-service-specific courses in the last two years of training, preparing fresh PMA graduates for their specific branch of service, for the graduates to be ‘field-ready´, ‘fleet-ready´ or ‘squadron-ready´ upon graduation. Also that same year, in accordance with Republic Act 7192, the first female cadets were admitted into the Philippine Military Academy.